This simple corn soup recipe is a variation on the Chinese Trini-style corn soup that I grew up with. It's easy to make, is dairy-free and can be made vegan.

There are 2 styles of Trinidadian corn soup that I grew up with: a spicy, chunky soup with split peas, large cut root vegetables, dumplings & small pieces of corn on the cob, and this simple and easy Trinidadian corn chowder that is often made with creamed corn, corn kernels and chicken. I've made a few adjustments to this recipe over time with the addition of coconut milk and fish sauce, and removing the chicken.

What kind of corn should you use?

The main ingredient in this soup is sweet corn. You can use canned creamed corn and corn kernels, frozen corn or fresh corn cut right off the cob.

I love making this soup with sweet summer-fresh corn. It's a simple and delicious recipe that allows the corn flavour to really shine!

If you are using fresh corn cut off the cob:

If you are using frozen corn, follow Step 3 above in place of creamed corn.

This corn soup is often made with chicken and milk. I've made small adjustments to make this a vegetarian version of the recipe.

How to serve this soup

This corn soup is really great served with some crusty bread or a savoury scone for a light lunch, or served as a starter.

Is this a traditional recipe?

This is a soup that I grew up eating, and have memories of my father making it. I'm sharing the version that I remember eating with a few small twists. It really is a simple and budget-friendly recipe. 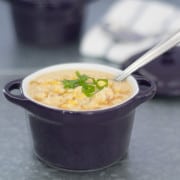 This simple corn soup recipe is a variation on the Chinese Trini-style corn soup that I grew up with. It's easy to make, is dairy-free and can be made vegan.
Print Recipe Pin Recipe
Prep Time 10 mins
Cook Time 15 mins
Servings 4

Chinese-style dishes can be found all over Trinidad.

Chinese immigrants initially arrived in Trinidad in 1806 in one of, if not the first, settlement of Chinese people in the Caribbean. This was an experiment intended to create a labour source in the newly acquired British colony. Read more at The National Library and Information System Authority.