This simple, healthy 4-ingredient beet smoothie can be made with raw or cooked beets for a nutrient-dense drink. Vegan and paleo friendly with no added sweeteners, this beet smoothie is a great way to use up leftover cooked beets.

I have a confession: I don't like raw beets. Cooked, fermented and pickled I'm okay with but raw beets are just too earthy for me. They kind of taste like dirt. Yup, I'm in the 'raw beets taste like dirt' camp. Guess what? There is a reason that some people, myself included, think raw beets taste like dirt. According to Irwin Goldman, beet breeder and professor of horticulture at the University of Wisconsin, beets contain an organic compound called geosmin that gives them their earthy taste.

An organic compound produced by microbes in the soil, geosmin gives off a smell like freshly plowed earth or a field after a rainstorm. Human noses are very sensitive to geosmin, and while some people don’t like it, others love it. Other foods high in geosmin include spinach, lettuce and mushrooms.

Since beets are full of amazing nutrients, I still find ways to incorporate them into my diet. That's how this beet smoothie was born. With just a few ingredients, it's simple to make and delicious to drink. And it doesn't taste like dirt.

Why this beet smoothie is so good

Options for making this smoothie 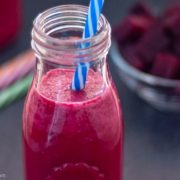 « How to deseed a pomegranate
Kaniwa vs Quinoa »